I've been nervous all day watching the news reports about New Orleans' apparent impending doom. Many news reports are already calling this the storm of the century, and it's going to hit the worst possible location: New Orleans. I really hope I have a city to go back to. :-( Here's one article that won't let me sleep easy tonight:

Looking Forward To The Weekend

With the end of the (military) fiscal year approaching, things have been crazy around the office this week due to my "additional duty" as the Billing Official for the Comm Resource Advisor. I enjoyed my accounting classes in college, but having 5 Excel spreadsheets open (each with about 8 - 12 tabs) and a desk full of financial printouts and multiple calculators has lost any appeal it may have had.

On the bright side, though, it's been a big week for software, with Google Desktop 2, Google Talk, & TiVo Desktop 2.2 all launching. I've had a little time to play around with all 3, but I'm really looking forward to testing them out this weekend.

I think I'm also ready to break down and buy a few more hard drives. At my current rate of downloading at least 1GB of music a week (with the Essential Mix, John Digweed's Kiss 100 shows, Hernan Cattaneo's Metrodance shows, and other live mixes from Mercury Nation & djmixes2k), my 700GB of storage is zapped. I'm looking to buy 1 or 2 320GB hard drives from Newegg.com, & another spindle of 100 DVD+R's.

One more day of work this week looms on the horizon, and it's expected to be just as busy as the previous four days, so it's time to get some rest.
Posted by Juston Western at 8/26/2005 02:30:00 AM No comments: 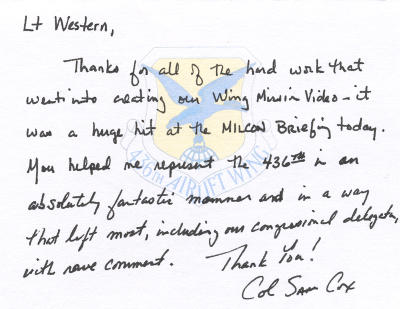 On Thursday I got a thank you note via base mail from the Wing Commander thanking me for my work on the Dover Wing Mission Video. If you'll remember, it was debuted last Monday at the annual MILCON briefing, and I was somewhat amused that the soundtrack to the video (all electronica) was going to be listened to by Senator Biden, who was co-sponsor of the RAVE Act (see my previous post for all the details). Well, upon reading that note, I couldn't help but audibly chuckle after seeing his word choice. Read the scan of the note above to see what I mean. :-)
Posted by Juston Western at 8/21/2005 04:25:00 PM No comments:

Wing Mission Video at MILCON & Getting a Coin

The briefing at the Sheraton for MILCON went well on Monday. I got to the hotel at about 5:45AM to work with Milt on setting up the laptop and making sure that Col Cox’s slides and my video were working smoothly. As planned, each worked perfectly. After the presentation of the Wing Mission Video, there was a rather boisterous round of applause, so it’s good to see my creative work flies with the public at large.

Ironically, Senator Biden had to follow the Wing Mission Video. The most peculiar part, however, is that he was actually tapping his foot to the music during the Underworld tracks. Could Mr. RAVE Act himself potentially be a closet Underworld fan? The more likely answer is that he had a few too many cups of coffee that morning and would’ve been keeping beat with a washing machine had it been in the room.

It was interesting hearing Sen. Biden, Sen. Carper, & Congressman Castle speak. One thing I will say about Delawarians: they are just as passionate about their state as Texans. Admittedly, most politicians have love for their state, but these guys eat, drink, & sleep Delaware. I was also told at the briefing that Sen. Biden is considering running for the Democratic presidential nomination in 2008. I don’t think I’d vote for the guy, but it’ll be neat to say I ate breakfast about 10 feet away from him when he was “only a Senator”.

This morning on my way to work, I got a call from Maj West letting me know that my presence had been requested at the Wing Standup Meeting scheduled for 8:00AM. At first I thought they wanted me there to take inputs and feedback on the video from all the group & squadron commanders (which would have been less than pleasant trying to consolidate 25 opinions into a revised product). Quite the opposite was the case, however. Col Cox asked that I come so that he could recognize me in front of the base leaders and give me a Commanders Coin.

So that was a welcome, albeit unexpected, reward for working on this project so much over the past 3 weeks. Truth be told, the project was tedious, but entertaining and educational, too. I had the opportunity to learn a new software tool, and I’ll probably end up creating a few slideshow videos for my website because of this experience.

For those of you who may not have seen it, you can view the Dover AFB Wing Mission Video at this location. If you haven’t already done so, you’ll need to install Google Video Player on your computer to view it.
Posted by Juston Western at 8/18/2005 02:39:00 AM 1 comment:

First to bring you up to speed...

I got tasked about two weeks ago with creating a "Wing Mission Video" for Dover AFB. Apparently our new Wing Commander was stationed at Charleston AFB before coming here, and they kept one of these videos on file to show to VIP's, newcomers to base, & state/local leaders at briefings.

Since we don't have any real "video" footage from Dover, and they weren't willing to buy me a video camera to run around with for a few weeks (boooo!), I told them that I could do a “glorified PowerPoint presentation”, using Windows Movie Maker and including photos from base spliced together (with pans & zooms) along with some stock video clips of C-5's and Night Vision Goggle stuff.

They said that was what they had in mind anyway, so I went to work gathering photos. At the first meeting I asked if there were any musical requests, but I was just told to make it tasteful (i.e. no gangsta rap or death metal). Other than that, the Wing Commander told me I could essentially use whatever songs I wanted.

Well, after foraging through my music collection (who knew I had so many electronica MP3's?!) I settled on a 6 minute medley of clips from the following songs:

Aside from the fact I'm apparently on a huge Underworld kick this week, it's obviously not your typical background music for military-related events/slideshows/videos/whatever. But I showed our Wing Commander a draft of the video earlier this week, and the only suggestions he had were for photo tweaks & additions. He said the music was fine with him, and rather "upbeat".

At the end of the meeting, he told me that the first official showing of the video would be at a meeting next week downtown in Dover, where all the state & local big shots will be in attendance...to include, that's right, Mr. RAVE Act himself, Senator Joseph Biden. For those of you who may have forgotten, check out this link from EMDEF.

Now I'm not disillusioned: I know the RAVE Act was not legislation proposed out of Sen. Biden's disdain for electronica. But I'm going out a limb here, and I'd say maybe, just maybe, that we're not going to find any Ministry of Sound albums in his car CD changer. And by the witty name of his now-defunct bill, I'd say that in his mind, drug use & raves are inextricably linked.

So maybe it's just a passive-aggressive streak in me, but I'll take some amount of pleasure in pushing the play button in Windows Media Player on Monday morning and treating the most honorable senator from to 5 minutes and 52 seconds of "RAVE music" set to military photos. :-)

Saturday Night at the Drive-In Movie