A Jazzy Evening Out In Dover

About 3 weeks ago, my favorite jazz artist, John Axson Ellis, was in Philadelphia for a performance. Unfortunately, this coincided with our Air Show weekend, so Ashley & I weren't able to get up to Philly for the show. Last night, however, we were able to get our jazz fix locally, as the Air Force Reserve Full Spectrum jazz band did a free performance here in Dover at the Schwartz Center downtown.

We decided to make a date night out the occasion, going first to Smither's for cocktails and appetizers. I had also received an invitation to a cocktail hour on the third floor of the Schwartz Center prior to the show, so we checked that out, too, before taking our seats.

The show lasted about an hour and a half. While the vast majority of the songs were jazz numbers, the band did throw in a smattering of patriotic tunes and oldies tracks to keep the interest of those in the audience who weren't jazz aficionados. I especially enjoyed the contributions of one particular saxophonist, who really had a New Orleans' flair about him.

After the show was complete, we walked down Loockerman to The Dirty Beggar. I'd heard good things about the establishment, with it having a reputation as one of the more upscale bars in Dover. Ashley got a great Mojito, while I opted for a Maker's Mark on the rocks. When we were done, we stopped in to Angelo's Pizza Restaurant just before closing time and grabbed a couple of pepperoni rolls to go.

Overall, a really fun Friday night outing reminiscent of our excursions in the French Quarter back in college. Nothing like some good music and good beverages to keep the heart young. 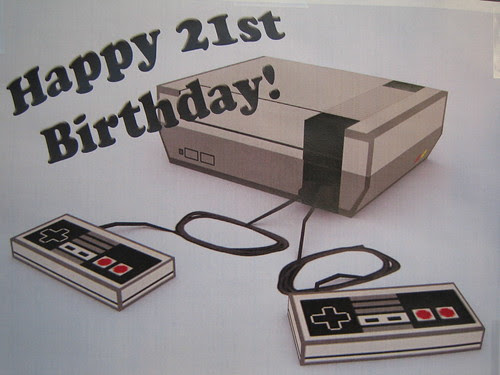 Last Wednesday, October 18, 2006, was the 21st anniversary of the Nintendo Entertainment System's release in America. With the NES representing such a large portion of my childhood entertainment, I couldn't let the event pass uncelebrated...especially with the little console finally old enough to drink!

Ashley & I put together a Nintendo-themed party for the occasion, complete with emulator action of ROMS from all the old classics I used to own and 5 hours of hand-picked video game music remixes I found online last summer. We ordered several pizzas from Dominoes (just like back in the '80s!), and Ashley whipped up two Mario adult beverages: Mario's Dream & Princess' Pink Martini.

While we had Mario Kart Double Dash & Mario Dance Dance Revolution hooked up in the basement, the run away successes of the evening were the original Bases Loaded and Tecmo Bowl running on my laptop upstairs. Despite the poor graphics, some games are just classics. And of course, Super Mario Bros seemed to have sentimental value for everyone who picked up a controller.

We asked attendees to dress in video game or '80s themed attire. The clear-cut winner of the night was Amber, who dressed as Mario for the occasion, complete with white gloves and mustache. Be sure to look for her in the photos.

So happy 21st, NES. You'll always hold a special place in my heart and those of most of the children from the 1980s!

Now for the digital memories. Check out the photoset on Flickr and two clips now up on YouTube. 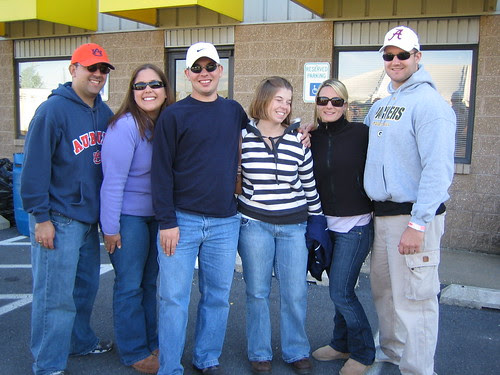 This weekend we checked out the local brewery which was holding its first annual Oktoberfest celebration. The price was $20 for two meals and 3 drink tickets, so we got there shortly after kickoff to get the most bang for our buck.

Overall a really fun afternoon. The weather was beautiful, clocking in around 45 degrees with sunny, blue skies. They had a horseshoe pit setup, so we parked our folding chairs nearby and played several rounds of horseshoes while drinking beer and listening to the local bands.

The festival wasn't nearly as big as the Oktoberfest we went to in Newark, DE, last year, but the closer proximity more than made up for the smaller scale. We also went on a brewery tour while we were there. The whole operation is run by two full time employees and then a small contingent of volunteers who lend their services for free beer and pizza.

Concerning the types of beer they had on tap for the event, it was a selection of 4 different brews. There was a light Lager, the Oktoberfest seasonal, a red-colored Tavern brew, and an ultra dark Oyster blend. My favorite was the Oktoberfest, which had the most balanced flavor of the four brews.

As usual, I took many photos and a selection of video clips. You can check out the 72 photos on Flickr, and 6 videos on YouTube. 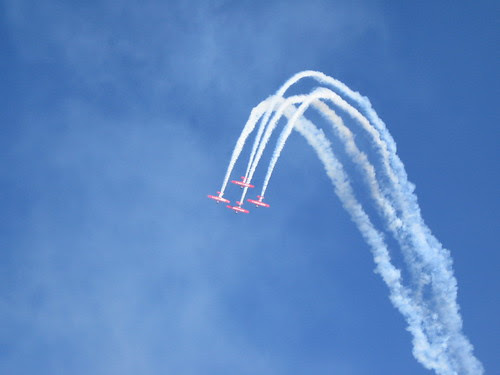 As fate would have it, I lucked out this weekend and only had to work Saturday morning for the Air Show. This let me catch some college football on Saturday afternoon (stupid Arkansas), and then be a spectator for the Sunday portion of the Air Show.

With this my first time attending an Air Show, I really went in with few expectations. I'd seen the movie Tarnished Angels (based on William Faulkner's novel Pylon), but that was about the extent of my exposure to aerial acrobatics. The event was actually pretty entertaining and definitely a departure from our typical weekend fare.

I'd say the highlights were:

- Seeing an F-18 cause a Prandtl-Glauert condensation cloud by nearing the sound barrier
- Going inside the cargo bay of a C-17
- Watching the Aeroshell Team leave the crowd of nearly 50,000 in a cloud of smoke
- Witnessing the Thunderbirds' performance...made me think of the Team America theme song

As promised, I've put the photos and video clips from the event online. You can check out the 85 photos on Flickr or watch the 11 videos on YouTube.

Trying To Warm Up My Writing Motivation

I need to crank out a couple of essays for my grad school application today, so I'm starting with a blog post to get my writing juices flowing.

Earlier this week, Dover AFB held their annual MILCON (Military Construction) briefing at the Sheraton downtown. Like last year, I was tasked with making sure the A/V needs were met. Unlike last year, the morning setup didn't exactly go swimmingly.

This briefing was supposed to serve as the debut for a new touch-screen equipped podium, whose construction stemmed from feedback received after last year's MILCON brief. The idea was if the briefer had the slides in front of him, then he wouldn't have to turn around to make sure he was speaking to the right data. Easy enough.

After arriving at the Sheraton at 6:00AM to make sure the Airmen weren't hitting any configuration roadblocks, I realized it was going to be one of those days. The laptop was communicating fine with the podium, but the projectors just didn't seem to see a signal. We tried 3 different laptops, but none seemed to be recognized by the Sheraton's A/V rack. The morning supervisor wasn't exactly a technical expert, either, claiming that only Dell laptops would interface with their system. Heh.

Long story short, the patch panel on the floor had to be power-cycled and then everything worked fine. When the Sheraton's A/V Guru finally showed up at 7:00AM, though, he spent 30 minutes redoing everything the Airmen had already tried before finally agreeing to attempt a reboot of his A/V rack. The breakfast was supposed to start at 7:15AM, but didn't have everything fully functional until about 7:30AM. The event organizers were accommodating, though, and the 15-minute delay didn't represent a show-stopper.

The bad news was that because of the technical hiccups, we didn't have time to reconnect the new podium, so alas the touch-screen goodness would have to wait until the next big event.

I debuted the October 2006 version of Dover's Wing Mission Video after the Colonel's briefing. This was a project I'd been working on for the past month or so. It went over quite well, and I ended up personally receiving kudos from both Senator Joseph Biden and Senator Tom Carper after the event was finished. Yeah, the same Joe Biden whom I took pleasure in making listen to my electronica music during last year's MILCON briefing. :-) Speaking of which, you can view last year's video at the following location:

I'll get around to uploading the 2006 version within the next couple of weeks.

I'm off of work today because I have to work both Saturday & Sunday at the Air Show that Dover AFB is hosting this weekend. I heard a couple of the Thunderbirds flying in earlier this morning, so things seem to be ramping up in preparation. Even now, I don't know exactly what role I'll be playing at the event this weekend, but I have a feeling it'll entail running random errands for the Colonel as things pop up.

While my initial plan was to hold off launching JustonWestern.com until I had every area complete, I realized that I'd been paying $9.99 a month since March 2005, and really hadn't done anything with the domain. So after finishing up with my GMAT yesterday, and looking for a new project to undertake instead of studying everyday, I figured I would put the framework of JustonWestern.com on the server.

I spent a little time developing a roll-out schedule for the different areas of the site. I'm hoping by actually marking these down on Google Calendar, it will motivate me to continue with the development. If I stick to the schedule, I'll be rolling out new areas every 2 to 3 weeks. This seems a little more manageable than the daunting project of building the entire site for a grand opening style launch.

Right now the huge content areas consist of my photos on Flickr and my videos on Google Video. Eventually, I'm going to have all the media also hosted on my site, but to start off I've just linked to versions on the third party sites. Flickr & Google Video also make commenting on individual pictures & videos really easy, so there's a benefit of having them there, too.

The jury's still out on the usefulness of having a Forum on my site. Granted, I could just ask people to post feedback about my site either here on Blogger, or over on MySpace, but I've always had a special place in my heart for the traditional style of bulletin boards like vBulletin & phpBB. I'm hopeful the Forum turns out to be another useful way of communicating with friends and family.

As I say on my front page, I envision the site ultimately growing into something of a digital media locker. I plan on having all the websites I've built over the years (like NOLAED, my EAHS school website, & my very first "homepage" back from 1997) eventually hosted on JustonWestern.com. In addition, I'll want to get various papers I've written in school and music I've produced posted to the site. As you can see, it will become fairly comprehensive, and I want to make sure I give each new area the attention it deserves.