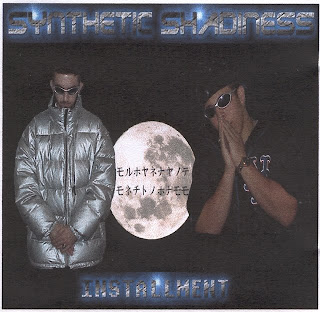 During December 1999 & January 2000, I along with my brother, Matthew, & friend, Ryan Wimberley, produced an electronica album under the collective name Synthetic Shadiness. Individually, we had three pseudonyms: I was JetaTek, Matthew was Crazy Shady, & Ryan was Cain.

After making the album, we even went through the process of getting 100 copies pressed, and assembled the resulting discs in jewel cases with album artwork (see adjacent...hey, it was the 90's). We sold the album for $8 a pop, and were pretty successful in unloading all of them through sales at our high school & at a couple of raves in New Orleans.

A couple of weeks ago I was sorting through my iTunes library and ran across the ripped MP3s from our album. Surprisingly, I felt the songs aged pretty well. You wouldn't mistake them for Grammy winning tracks, but they're definitely a couple of notches above a toddler banging on a Casio keyboard.

I thought I'd share the album with those of you who may be interested in giving it a listen. There were originally 18 songs on the album, but I've added a bonus track of a remix I did back in April 2004 as my semester final project in the Computer Music course at Tulane.

The download link is below. Just unzip and enjoy!

Like many, I really enjoy running with music. Although I circulate the tunes on my iPod fairly regularly, there's a core set of tracks that I find myself consistently reloading to keep me motivated while running the trails here in The Woodlands.

A few months back I read a post on the Houston Chronicle's TechBlog about Muxtape. Basically, it lets you create a web-based mixtape to share with friends. You can't download the songs, but you can listen to the tracks in their entirety.

Since I get pretty jazzed about the music I'm listening to at any given time, I thought Muxtape would lend itself fairly well to sharing my current tastes with others. So click the link the below to listen to the compilation of songs I use to keep the adrenaline flowing.