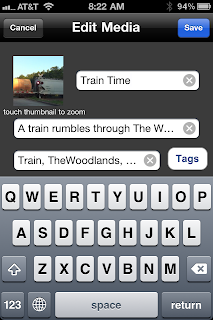 This week's selection is a handy utility to work around a limitation in iOS 4.  While the iPhone 4 is touted as being able to shoot 720p video, actually getting that video off the device in HD resolution isn't as simple as you might expect.

If you upload a video to YouTube directly from your phone's Camera Roll, the video is compressed before uploading.  There are 2 ways around this.  First, you can connect your iPhone 4 to your computer, and export the file manually (via Image Capture or iPhoto in OS X) to get the video in its full resolution.  The second option is Pixelpipe.

This service allows you to export your photos & videos to all the major social networks & photo/video sharing sites.  The truly notable aspect of their iPhone app, however, is that it will export your 720p videos in full resolution...all wirelessly from your phone.

I've been utilizing this solution to push my iPhone 4 720p videos to YouTube for the past several weeks.  It works just as advertised.

The Pixelpipe service & iOS app are both free.  A Pixelpipe account is required before you can link your social media accounts to the app.

You can sign up & find the link to the app at Pixelpipe's site:

Hat tip to Gizmodo for the news: