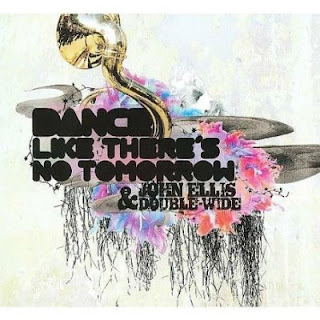 This 2008 album from John Axson Ellis still stands out as my favorite in his discography.  I became a fan of Mr. Ellis practically by accident in early 2003, when I briefly glanced at the calendar for Snug Harbor and thought I read that Ellis Marsalis was playing at the historic jazz club on a Thursday evening.  My later-to-be wife, Ashley, & I headed downtown to Frenchmen Street, and upon arriving at the club & realizing my mistake, decided to check out this John Ellis character despite his decided lack of being Ellis Marsalis.  Quite simply, I was blown away by his performance and have been a fan every since.

"Dance Like There's No Tomorrow" saw John assemble a band of New Orleans favorites under the collective name of Double-Wide.  This consisted of John Ellis on saxophone, Matt Perrine on sousaphone, Gary Versace on organ, & Jason Marsalis on drums.  Yes, in an ironic twist, it seems John Ellis tapped the percussion prodigy Jason Marsalis, son of Ellis Marsalis, to be in his band.

There is something immediately soulful about this album when you listen to it.  Like a Sunday morning in a New Orleans church, you have the unmistakable sounds of an organ & tambourine to lift your spirit.  Each of the 9 tracks on the album play into the concept of dancing.  Some of the tracks are playful and upbeat, while others take on a more melancholy and introspective tone.  Like the juxtaposition of a festive second line against a jazz funeral, dancing plays an integral part in each.

As part of his CD release tour for this album in 2008, John Ellis performed at the New Orleans Jazz & Heritage Festival that year.  I jumped at the opportunity to hear songs from the album performed live, so Ashley & I traveled over from Houston for the show.  Below are three videos I filmed during that performance, including my favorite track from the album:  Three-Legged Tango In Jackson Square.

If you're a fan of jazz, just curious about the genre, or enjoy New Orleans-inspired music, I cannot recommend this album enough.  It's earned a permanent place in my car CD changer, iPod, & iPhone.  That's saying something.  The Amazon MP3 link is below.

John Ellis And Double-Wide - Dance Like There's No Tomorrow